William Turner Gallery is pleased to present, Ed Moses: Chance and Circumstance, an exhibition featuring new works by the prolific Los Angeles-based painter. Ed Moses’s painterly process is one of inexhaustible experimentation. A self-described “mutator” and compulsive creator, he is still producing work at a staggering pace, undeterred by his 91st birthday upcoming in April. The artist has experienced a period of revitalized productivity, following the exceptional success of his recent survey exhibition Moses@90, and has been creating some of his most inventive and challenging works to date. As part of an unprecedented exhibition cycle presenting Moses’s second major project with the gallery in two consecutive years, Chance and Circumstance will include new, never-before-seen paintings alongside a selection of earlier works. 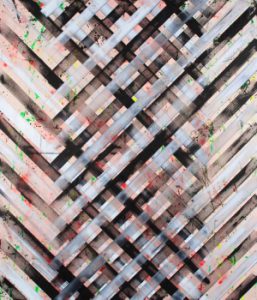 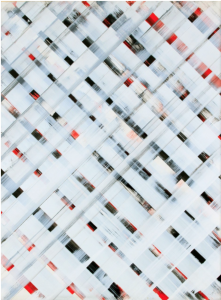 Among the new bodies of work included in the exhibition are recent iterations of Moses’s dynamic grid paintings. These have never implied static formal stability for Moses but rather frameworks in flux. Delineated by thick bands of black, white, and gray, the grids are punctuated by splatters and drips of vibrant, sometimes neon, colors. In Moses’s hands, this typically rigid geometric formation is transformed – lines are fractured, often ending abruptly, and colored bands vary in transparency and weight, allowing the superimposition of marks to emerge and recede for a deeper sense of dimensional space. The more gestural abstract motif of Moses’s “worm” paintings reappears in this exhibition as well. These curvilinear, tunnel-like passages seem to undulate and carve out pictorial space from within, conveying the unmistakable feeling of spontaneity so integral to Moses’s work.

The phrase “chance and circumstance” has become something of a mantra for Moses. A student of Buddhism, he has made a career of fearlessly blazing down the path of the unknown. A practice of daily meditation keeps Moses anchored in the present, a lifestyle choice and sensibility, which is evident in his paintings. Driven by the metaphysical power of painting and its potential to transform, Moses bypasses the need to be in control and favors the idea of being in tune with the pieces he is coaxing into existence. Moses has stated, “My paintings are on an endless path” – each work leads to another in a sort of perpetual evolution. Art historian Barbara Haskell has remarked of Moses that this relinquishing of control “allows him to step outside himself, letting his materials direct his hand without conscious interferences.”

A member of the original stable of artists showing at LA’s legendary Ferus Gallery, Moses exhibited there for the first time while still an MFA student at UCLA in 1958. Exhibiting among the fabled “Cool School,” Moses was among those who shaped the infancy of the West Coast art scene. Never has an appreciation and appetite for LA’s art history, or its living legends, been more keen than now. Recently included in the newly minted series Artists Talk: LA Legends presented by The Broad Stage and Sotheby’s Institute of Art Los Angeles, Moses took the stage in January with Cool School Alums Larry Bell, Billy Al Bengston and Ed Ruscha to regale the audience with their living histories. A maverick among them, given his preference for process driven abstraction over any strict adherence to the Finish Fetish and Light and Space movements, championed at the time, Moses has always done things a bit differently.

“The rational mind constantly wants to be in charge. The other parts want to fly. My painting is the encounter between the mind’s necessity for control and its yearning to fly, to be free from our ever-confining skull.” – Ed Moses

ABOUT ED MOSES
Ed Moses has been the subject of several major solo exhibitions nationwide. Most recently, the Los Angeles County Museum of Art mounted a solo exhibition of Moses’ drawings from the 1960s and 70s, curated by Leslie Jones in 2015. He was the subject of a major retrospective at MOCA Los Angeles in 1996, and in 2014, was featured in a retrospective at The University of California Irvine, entitled Cross-Section. His works are featured in the collections of some of the most prominent cultural institutions nationally, including the Corcoran Gallery of Art, Hammer Museum, San Francisco Museum of Modern Art, Whitney Museum of American Art, and The Museum of Modern Art in New York.

Ed Moses: Man of the Tribe